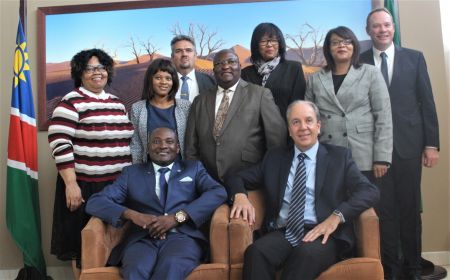 Namibia Wildlife Resorts (NWR) board of directors has been reappointed for a three-year period with effect from 15 June 2019.
The reappointment of Ambassador Leonard Iipumbu (chairperson), Janet Wilson-Moore (vice chairperson), Rudie Putter, Carol Williams, Bernd Schneider, Eva Shifotoka and Elizabeth Petersen, was announced by Minister of Environment and Tourism Pohamba Shifeta at a media briefing here on Monday.
Shifeta said the decision to reappoint the board was necessitated by the good results the board produced since its appointment in 2016.
He noted that in 2017, revenue increased by seven per cent from N.dollars 339 million to N.dollars 361 million, whilst the cost of sales reduced from 60 per cent in 2016 to 50 per cent in 2017 and an industry benchmark of 35 per cent in 2018.
This board stood together in times of challenges and took hard decisions when it was necessary. These decisions and actions were all taken in the interest of the company, staff and shareholders, he said.
The minister further explained that NWR made an operational profit of N.dollars 23 million in 2018 compared to N.dollars 15 million in 2017.
He said the most important task of the board of directors is to steer the companys strategy in a manner that will ensure that it meets the economic targets set out for the company in the long term and generate value for shareholders.
At the same occasion, Minister of Public Enterprises Leon Jooste said the board displayed good leadership as when they took over, the company made huge losses, which they had to fix.
By appointing the right board members with the right skills, experience and integrity, we have solved 80 per cent of the problems at NWR, he said.