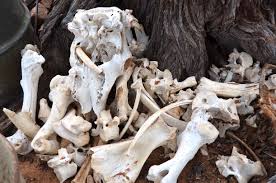 A group of about eight women make a living by collecting bones, packing and supplying them to a local businessman in Ongulumbashe informal settlement in Okuryangava, Windhoek.
White bags filled with bones are seen stacked alongside Ongava Street in Okuryangava waiting to be weighed.
Nampa caught up with some of the women of the group on Saturday who collect the discarded bones.
Martha Mbaka, 41, said they collect as many bones as possible from the riverbeds and surrounding areas of Okuryangava, Havana and other places and pack them into 50-kilogramme bags before selling them to the businessman.
“The man we sell it to comes with a scale and weighs the bones, he then sells it to bigger markets in Windhoek,” she said.
It is unclear what the bones are used for.
The unemployed Mbaka said it is not easy for women to trawl the riverbeds, noting they walk about 15 kilometres per day searching for bones in order to earn a living for their families.
“We sell them together at once and each group member receives about N.dollars 250 from the sale,” she said.
Forty six-year-old single mother of three, Selma Lukas said the N.dollars 250 she earns from the bones hardly covers her monthly household needs, especially food, adding she feels pity for her children who at times go to school on an empty stomach.
“From that money I buy cooking oil, rice, soup and meat to feed my family but it is not enough,” she said, tears rolling down her cheeks.
Her first-born is in Grade 8 at Immanuel Shifidi Secondary School while the Grade 4 child attends school at Tobias Hainyeko Primary School and the last born is a toddler, she shared.
Lukas however told Nampa that despite the difficult situation she finds herself in, she will go and vote for the party of her choice come the general elections on 27 November 2019.
(NAMPA)