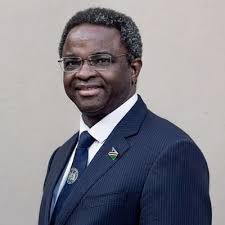 The Swapo Party politburo has expelled former independent presidential candidate Panduleni Itula from its rank and file, citing that his actions during the elections were aimed at breaking Swapo and its election ambitions.
The decision to expel Itula was taken at a meeting on Thursday and was announced by the party’s spokesperson, Hilma Nicanor at a press conference late Friday afternoon.
“The political bureau of the central committee of the Swapo Party, at its meeting held on 19 March 2020 resolved in terms of Article 13 (8) of the Swapo Party constitution to expel Dr Panduleni Filemon Bango Itula from the Swapo Party with immediate effect,” Nicanor firmly stated.
She charged that Namibians, Swapo supporters and sympathisers should now consider the “Itula issue closed”.
The politburo premised its decision mainly on Itula’s registration as an independent presidential candidate during the 2019 Presidential election which meant that he competed against Swapo-chosen candidate, Hage Geingob.
“All party members, including himself (Itula) were under an obligation to observe and comply with the decisions, resolutions and directives of the majority, even when such members hold a diverging opinion as per Article 10 (a) of the Swapo Party constitution,” Nicanor added.
Itula’s presidential candidature and campaign was equated to a provocation aimed at causing division within or destroying the ruling party, as captured in paragraph 16 of the Swapo Party code of conduct and disciplinary procedures.
Swapo argues that Itula connived with opposition parties and manifestly against the interest of Swapo and its presidential candidate.
“[Itula] supported other political parties, organisations and individuals that are in competition with the Swapo Party and in a manner that is wholly contrary to the aims, objectives and policies of Swapo,” she said.
Further, Nicanor added: “[Itula] acted on behalf of and in collaboration with counter-revolutionary forces whose aim is to destroy Swapo and damage its electoral fortunes and that of its presidential candidate.”
In the last elections, Geingob’s support waned from the overwhelming 87 per cent he got in 2014 to 56,3 per cent, while the ruling Swapo Party lost its two-thirds majority in the National Assembly.
According to Swapo, Itula refused to accept a communique on several occasions from Swapo which were aimed at according him the opportunity to respond to charges levelled against him.
“He is deemed to have been found guilty as charged,” Nicanor said.
Swapo’s governing laws still accord Itula the right to appeal his suspension, Nicanor pointed in her conclusion.
She also confirmed that Itula received his marching order (expulsion letter) on Thursday.NAMPA