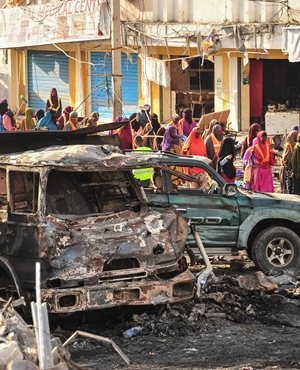 The director of an ambulance service in Somalia's capital Mogadishu says the death toll from Saturday's truck bombing is now over 300.

Dr Abdulkadir Adam, the director of Aamin Ambulance, says more people have died of their wounds in the past few hours.

This is the deadliest single attack the Horn of Africa nation has experienced to date and the death toll is expected to rise even higher. Somalia is blaming the al-Shabaab extremist group, which has not commented.

Officials say more than 70 critically injured people are being airlifted to Turkey for treatment as international aid begins to arrive.

Nervous relatives stood on the tarmac at the airport, praying for the recovery of their loved ones.

Overwhelmed hospitals in Mogadishu are struggling to assist other badly wounded victims, many burned beyond recognition.

The attack is also one of the worst in the world in recent years.
(News24)